Under new management: We are now accepting orders via the website again. We will have a dedicated phone number soon, but until then please call us at Anchor Academy  at 1-888-917-3783 and ask for Joy. We will be happy to help you. You can also email us at [email protected]

Life in a Fishing Community

This title looks at offshore fishing. Around the coast of much of North America, fishing stocks have greatly declined as a result of overfishing, pollution, and global warming. Nova Scotia, in the northeast of Canada, once had a huge fishing industry. In 1753, people from Germany, Switzerland, and France came from Europe to set up colony at Lunenburg on the coast. They soon set up a fishing and shipbuilding industry. The community grew until about 1980, when the fishing industry largely stopped. Since then, the community has had to reinvent itself. It is still largely based on the old industries, but tourism is as important. Lunenburg has a population of about 3500 people.

Did you know, you can now email your wish list directly to your teacher for approval from here? Once you have received approval, you can use your wishlist to purchase the approved items, and then fill in the purchase order and approving teacher’s name at checklist for payment.

To create a new wishlist or add an item to an existing wishlist, click on the button ‘add to wishlist’ when viewing product details. 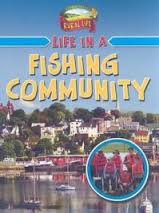 You're viewing: Life in a Fishing Community $9.95
Add to cart
Create a new list

We apologize for any inconvenience this causes, but we are currently not accepting returns due to Covid 19. We are taking precautions in consideration of our other customers and staff. Note: Some products from the USA may experience delays in delivery times due to Covid 19 Border restrictions. Dismiss